The Top Ten and Lists of Ten of Just About Everything

Pets, Facts, Casinos and Holidays – This Blog Has it All

Surly the only “plant” that eats animals is the Venus flytrap, right? Well, yes it does eat animals and it does make it onto this list, but it is far from the only plant to eat animals. In fact, some of the plants on this list eat whole mammals! If you thought Seymours plant from the classic movie ‘The Little Shop of Horrors‘ was scary, these ten will terrify you…

Let’s get the most obvious of these plants out of the way first. Yes, the Venus flytrap is a carnivorous plant but, it doesn’t eat the insects it catches. Not as such anyway. While it does have a digestive system of sorts, it just kind of dissolved them for the essential nutrients they might contain like nitrogen and phosphorous.

The Puya Chilensis is usually found in the Andes region in Chile and is often called the “sheep-eating” plant. While the plant doesn’t eat the sheep it does have huge hummocks of big thorny leaves which results in the sheep getting trapped in the bards so that it then dies and slowly decomposes into the ground making the plant grow bigger and stronger, causing more sheep to become trapped.

Yes, indeed this plant was named after the celebrated broadcaster and naturalist Sir David Attenborough, but it is also the largest carnivorous plant in the world reaching up to 1.5 metres (4.9 feet). But don’t worry about it eating us humans because the pitchers that it uses to catch the creatures it eats are only 30 cm (11.8 inches) in diameter.

This is one of the few plants in the world that is capable of rapid movement. Much like the Venus flytrap it has two lobes that fold together to form a snap-trap and small creatures like minnows and shrimp get caught up in it.

Native to southern Venezuela this is one of the few carnivorous plants that can grow on rocks and it traps insects using ultraviolet light! You see its tubes are highly reflective of ultraviolet light which many different insects are attracted to, but it also emits a sweet odour to attract ants and other insects into the tubes, then loose scales provide a poor foothold causing them to slip into the water-filled cup and eventually drown and be dissolved by the plant.

The forked-leaf sundew is an unusual looking plant for sure, with ‘forked’ like leaves that are covered in tiny hairs. Due to the thickness of these hairs small insects like ants and spiders and get caught up and get devoured by the steam as they start to decompose.

This perennial herb is covered by a compact layer of sticky sweet smelling glands that just about any insect will get stuck to, especially small wing bugs. But that is just the start of the insect’s problems because the plant will then bend other stems towards the trapped bug until it forms a small pile of them around it and the creature slowly gets devoured.

Much like the English Sundew before it, this plant again has white hairs covering the leaf petioles which small insects get trapped inside. It is often grown in cultivation in cold water but has been found to thrive much better in heated water.

The Albany Pitcher Plant is a small, low growing, herbaceous species that have cups filled with spikes that allow the prey to enter, but hinders its escape. What is extra strange is that the plant has translucent cells which confuse its insect prey as they appear to be patches of the sky so it moves deeper into the plants spikes only becoming even more trapped.

And we finish with yet another of the pitcher plants, only this time it tends to climb up higher than other pitcher plants and produces much bigger and deeper pitchers to trap bugs giving it the rather embarrassing name of the toilet bowl plant.

Do you know of any other meat-eating plants? If you do why not leave a comment and tell us all about it.

Ten Weird and Curious Cases Of Suicide By Animals

Ten of the Worlds Rarest and Most Unusual Spiders

Ten of the World’s Rarest and Most Beautiful Pigeons 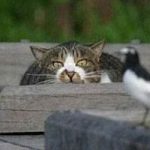 Ten Pictures of Cats Hunting Any Cat Owner Will Enjoy

This personal blog is little more than a site to make people smile. We have been posting since 2010 and have recently updated and refreshed the site. From top ten cat facts to a list of the best ten celebrates at the casino table, this site has a little bit of everything for everyone. It is all made for the purposes of entertainment and nothing else. If you have any issues with this site do get in touch with us via the Contact Us page.